These two lines do not "compete" with each other, they compliment, reinforce and strengthen each other, and the Red Line too.

To their own surprise, the proposed subway expansion makes better sense to planners when a Santa Monica Boulevard route is added to the traditionally better-preferred Wilshire Boulevard route.

A crowd of 75 attendees listened in rapture while Long Range Transportation planners explained how a Santa Monica spur running from the current Hollywood/Highland Red Line Station hooking up with a Wilshire line south of West Hollywood would not only increase ridership significantly, but also provides enough in travel time improvements to give Congress reason to fund the subway expansion.

“What was surprising to us,” David Mieger, project manager said, “is that adding Santa Monica Boulevard to the Wilshire route, in compliment to one another, it works [from a feasibility, cost and ridership perspective].”

Here are the maps of the finalists!

From the four finalist maps for the Westside Transit Corridor Extension Project, here are the revised alternative alignments for #11 and #16, the two finalists that includes the framework of the Pink Line. They are both great for the Pink Line. These two alternatives, while not including a one-seat ride to/from the Valley to/from the Westside, do include the possibility for extension south to Expo/LAX and extension east to SilverLake/Downtown.

Pick your preferred Wilshire alignment and send your support to WestsideExtension@metro.net 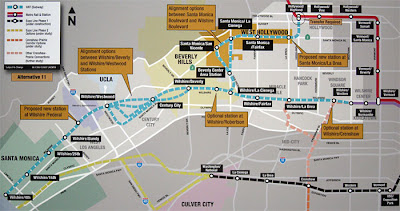 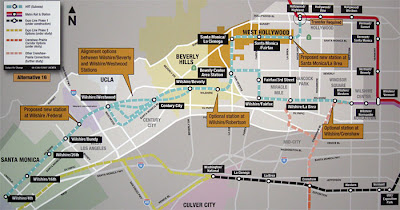 What I've been told thus far is that of the four final rail maps, two have the Pink Line! Woo hoo!

I will get maps to you just as soon as I can, but what is on offer is the Pink Line alignment going from the Purple Line up La Cienega, running on Santa Monica Blvd. then up to Hollywood and Highland.

There is every reason to celebrate. If these are built as light rail, they can be extended on the southern end to Expo or even potentially LAX. On the northeast end, it can be extended to Silver Lake and then downtown.

So pick the Wilshire alignment of your choice and let the MTA know you want the Santa Monica Blvd. line included in the final proposal.

The one downside is that this means there will not be a one-seat ride from the Valley to the Westside via Santa Monica Blvd. I really hope there has been sufficient support shown for a Sepulveda LRT going from LAX to Metrolink in the Valley to make it into the Long Range Transportation Plan. Countless people who are snaking through passes and canyons every day deserve a quality public transit alternative.

Social Networking for the Pink Line

If you'd like to meet others who support the Pink Line project, there are now "groups" on both MySpace and Facebook.

While you are on Facebook, join the Metro Westside Extension group and express your support for the Pink Line: - http://www.facebook.com/group.php?gid=10040701921

Please join Metro for the next round of community meetings to learn about progress on the Westside Extension Transit Corridor Alternatives Analysis Study. These meetings will update you about the refined set of alternatives that will continue for further study and the schedule for future steps.

Content presented at these meetings will be identical, so make sure to attend at the time and location most convenient for you.

For additional information or questions, please visit the Westside Extension Transit Corridor Study website at metro. net/westside or contact the project information line at 213.922.6934.
Posted by Dan Wentzel at 9:43 AM No comments: