Can we get higher capacity buses on the Orange Line?

As those of you who have read this blog know, I believe the Orange Line should have been built as and should be upgraded now as a light-rail line.

In the meantime, every time I ride the bus line everyone is stuffed like sardines into regular articulated buses.  Why not have tri-articulated buses as they have for other BRT systems in the world?

Here are two examples of what these type of buses look like. 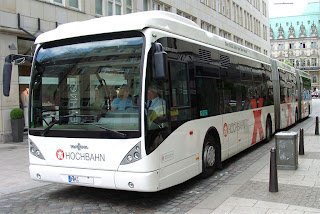 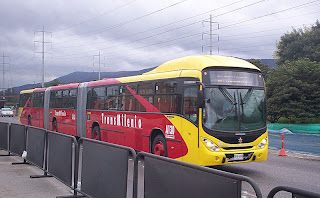 Metro, can we purchase some of these so we can breathe again?

Someone just informed me about a proposed West Hollywood "entertainment shuttle" that would be an effort to reduce traffic congestion and drunk driving.  It would have a party atmosphere.

West Hollywood Patch had the articles:

Considering how stuffed and crowded Line 4 is at night, I think this is worth exploring.  I'm imagining a double-decker bus with house Music and go-go dancers.

However, if I were designing an evening party shuttle, I'd do something a little different than just a circle around West Hollywood.

I'd see about partnering with the City of Los Angeles and connect to the Red Line at the Hollywood & Vine Station.  Hollywood & Vine is the historical center of Hollywood and an evening Party Bus that runs there could connect with Theatre Row and the emerging nightclubs east of West Hollywood on Santa Monica Blvd.

Here is one map with a circulating bus that would run clockwise and counter-clockwise: 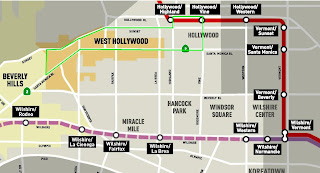 Here is the route I prefer. 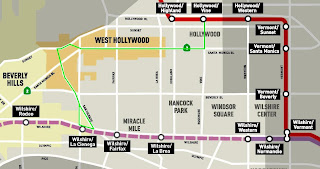 It shuttles people back and forth from the Hollywood & Vine station and passes through Theatre Row, goes through the east side of West Hollywood, then up Holloway to the night clubs on the Sunset Strip and then down San Vicente deep into the heart of  "boystown" down to LaCienega/Wilshire.  (Note:  I also think this would make a marvelous streetcar route and northern alignment extension of the Crenshaw/LAX Line.)

Evactuated Tube Transportation Technologies (ET3) wants to build a pilot tube traveling program in West Hollywood to connect it to the Red Line and Purple Line:

I still think the best case scenario for the West Hollywood region is to bring Metrorail here as part of a northern extension of the Crenshaw/LAX Line, to be supplemented with streetcars and buses running in transit-only lanes (and bicycle lanes on Fountain).

But, as someone has apparently made a presentation on this to the West Hollywood City Council, I thought you should know.  At one time people thought you could not sail around the world or that the human body could withstand speeds of more than 20 miles per hour.  If they prove me wrong, good on them.  But I don't think they will.