Where to Park a Bicycle?

I'm making my first trip to the bike store on Friday.  I need to be shown how to fix a flat tire and get my bike "fitted".  Next year's Aids Life Cycle is 51 weeks away.

One of things I am noticing as I go place to place is "if I had traveled here on bike, where can I safely and legally park it and lock it up?"  It seems one regular parking space could hold 3-4 bicycles.

Every mall, every shopping district, every destination should have safe and secure bicycle racks.  And, as the thousands upon thousands of bicycle riders in Southern California know all to well, they don't.

There is popular support for zip cars in Los Angeles.  How can Los Angeles get these bicycle rental stations I saw when I was in Toronto?  As we expand our Metrorail system, bicycles are a particular effective transportation device between your first/last mile and the rail station. 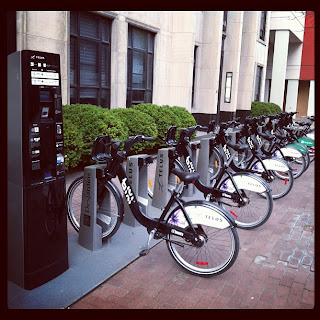 Posted by Dan Wentzel at 9:04 AM No comments:

My Adventure with the Bicycle is Just Beginning.

While learned how to ride a bike when I was younger, and I have all year to train, this is a daunting task for someone who never saw themselves as particularly athletic.  But this cause is one that is really dear to my heart and ALC raised 12.6 million this past year.  Next year is my turn to raise money and help out.

So, expect me to include bicycle coverage as part of public transit.

An essential blog for any bicyclist in Southern California is L.A. Streetsblog.

If you have any experience with bicycling in Los Angeles, from where to get bike gear to tips for the road, please let me know.

If you are behind a wheel, please be kind, because that cyclist you want to run over could be me.

Happy Cycling!
Posted by Dan Wentzel at 10:02 AM No comments:

KCET also covers this story:  "Desert High-Speed Rail Stays On Track: Groundbreaking Could be in a Year"

This Los Angeles to/from Las Vegas project is probably an easier High Speed Rail project to get off the ground than the also needed SoCal to/from NoCal project.

Some people believe the first LA-Vegas HSR route should have gone through the Cajon Pass, but I imagine it is more affordable to go through the high desert than plow through a mountain range.  There is already Metrolink commuter rail service between Los Angeles and Palmdale.  It wouldn't take much to electrify that portion to have a one-seat ride between Los Angeles and Las Vegas.

Another route can eventually be build between Vegas and the Inland Empire, Orange County and San Diego.  Let's get ONE route up and running.

When you hear a politician talk about how we cannot "afford" high speed rail in America and other infrastructure improvements, ask them how is America supposed to compete and stay relevant in the global economy in the 21st Century if we don't, especially as the era of cheap oil is forever gone?  What is the cost to our productivity if we can't and are forever dependent on oil to move goods and people?

However, before you do that, ask that politician how much campaign cash he is receiving from the oil lobby, which is desperate to stop ANY high speed rail project from being built in America and also contribute to ideological think tanks that "coincidentally" generate studies to show how we cannot "afford" high speed rail.

I will see you on the high speed train to Vegas!
Posted by Dan Wentzel at 10:00 AM No comments:

Next year Metro will probably be working on its SRTP (Short Range Transportation Plan).

Metro creates a LRTP (Long Range Transportation Plan) for thirty years, which it revised every five years or so, and a SRTP for the next five years.

At the February 2012 meeting of the Transportation Committee of the Westside Council of Governments the following was expressed and recorded in the Notes of the Feburary 2012 Meeting:

METRO will be updating its Short Range Transportation Plan (SRTP) in 2013 and is currently identifying projects for inclusion in its Strategic Element. This would be the time to support the northern extension of the Crenshaw Line to West Hollywood.  Information on schedule and milestones will be provided the committee. It was noted that our resources include lobbyists, sending letters to the appropriate entities, become more engaged in meeting, and coordination with other COGs.


I certainly agree with this and will do everything I can do as an individual to support this. 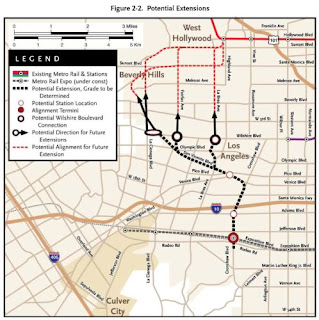 By the way, if you want to see Metrorail extended to Hollywood via West Hollywood, it wouldn't hurt to ask candidates for Federal, State, County and City governments to support this as part of their campaign.

Route discontinued. Service on San Vicente Bl has been replaced with Lines 30 and 330.

All trips exit/enter I-10 Freeway from Robertson Bl to serve the Metro Expo Line Culver City Station at Venice/Robertson for an improved connection to Downtown LA. Service continues to Washington/Fairfax Transit Hub.

Route modification terminates all weekday rush hour trips at USC/Expo Park. Non-rush hour and all weekend trips will terminate at Artesia Transit Center. Service to West Hollywood has been replaced with Lines 30 and 330.

Many of the bus service changes have to do with the opening of the first-half of the Expo Line between downtown Los Angeles and Culver City, and the subsequent need to optimize services accordingly.

For a complete list of all of Metro's coming service changes, check Metro's website or it's blog The Source.

Posted by Dan Wentzel at 9:46 AM No comments: