On Huffington Post, Rob Richie has created an excellent demonstration what it called "ranked-choice voting (RCV)" or "instant runoff voting (IRV)" in America, or "alternative voting (AV)" in Britain or "preferential voting" in Australia and Ireland, using this year's Best Picture contest for the Oscar.
http://www.huffingtonpost.com/rob-richie/poll-oscars-irv_b_824246.html
The Motion Picture Academy now uses this ranked-choice voting system to vote for Best Picture, and this voting system has been adopted by an increasing number of municipalities in America, including San Francisco and Oakland here in California.
I am a big fan of ranked-choice voting. I am not a fan of they system we use in America often called "first past the post (FPTP)". "First past the post" has left us with two major parties both under the influence of the same campaign contributors and offers little chance for other parties or new parties to break through except in playing the media-designated role of "spoiler".
Wouldn't you love to vote for your first choice candidate or party without worrying that you might help elect your least choice candidate or party?
The way ranked-choice voting generally works is that if no candidate wins more than 50% of the votes ranked #1, the candidate with the least number of #1 votes is eliminated and those votes are distributed to the #2 choices for the non-eliminated candidates. (If a voter does not indicate a next preferred candidate, that vote does not get redistributed and is said to have "exhausted"). After this, if no candidate has 50% of the votes, the candidate with the next lowest non-exhausted vote total is eliminated and those votes are redistributed to the next preferred candidate. This is process is repeated until a candidate achieves over 50% of the vote. Since the voters rank the candidates on the same ballot, this process has acquired the name "instant runoff".
Ranked-choice reduces the number of rounds of voting to be paid for, reduces negative campaigning and leads to consensus winners. For example, if a candidate doesn't win a majority of the #1 ranked votes, he/she will want to be liked enough by the other candidates supporters to be their #2 choice.
In the recent Oakland Mayoral election we saw the establishment candidate not win because he did not receive as high a ranking of preferences as the eventual winner. Even though the establishment candidate won a little over a third of the first-choice votes, nowhere near a majority, what the preferences of the voters determined is that Oakland now has a Mayor with the highest preferred support of the majority.
http://www.acgov.org/rov/rcv/results/
http://www.dailykos.com/story/2010/11/11/919562/-IRV-Produces-Stunning-Results-in-Oakland-Mayoral-Race
http://www.fairvote.org/oakland-faq
Please go to the linked website and check out the ranked-choice voting system in action for yourself. This is the electoral reform I strongly believe we should adopt locally, statewide and nationally.
For more information about ranked-choice voting a.k.a. "instant runoff voting", please go to http://www.fairvote.org/instant-runoff-voting/.
http://en.wikipedia.org/wiki/Instant-runoff_voting
Posted by Dan Wentzel at 12:10 PM No comments:

Whether you have a sweetheart or are "in-between" relationships, I hope you will consider attending MoveLA's 2nd Annual Valentine's Day Celebration tomorrow night. 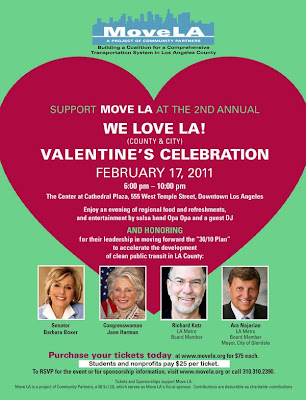