What about the Sunset Strip?

West of Vermont, Santa Monica Blvd. is sometimes seen in competition with Sunset Blvd. as a potential rail corridor.
Some affluent hipsters dream of taking Metrorail to the western Sunset Strip.
When traveling between UCLA and West Hollywood, the truth of the matter seems to be that there is just isn't much demand for public transit. The #2 Sunset Blvd. buses I ride are half-empty west of Fairfax. That is why there is a short line #2 terminating on its western end at Fairfax. The Los Angeles Department of Transportation ("LADOT") recently canceled its bus service on the Sunset Strip. Sunset Blvd. also doesn't even support an all-day limited bus, let alone a rapid bus.
When I attended the Metro community station planning meeting for the originally proposed Hollywood, West Hollywood and Beverly Hills stations for the Westside Subway extension, I overheard one gentleman say, "It's too bad we couldn't also put a station somewhere on the Sunset Strip. We're not bus people". (This is a true story and my eyes rolled into the back of my head when I heard him say it.)
However, one commenter on a transit blog made the following suggestion for the northern extension of the Crenshaw Line to Hollywood via West Hollywood:
Why not have the "Rose Line" (Crenshaw/LAX Transit light-rail) head north on San Vicente all the way to Sunset, then head down Holloway back to Santa Monica Blvd. for stops at Santa Monica &Fairfax and Santa Monica & La Brea.
So the Rose Line would be tweaked to look like this: 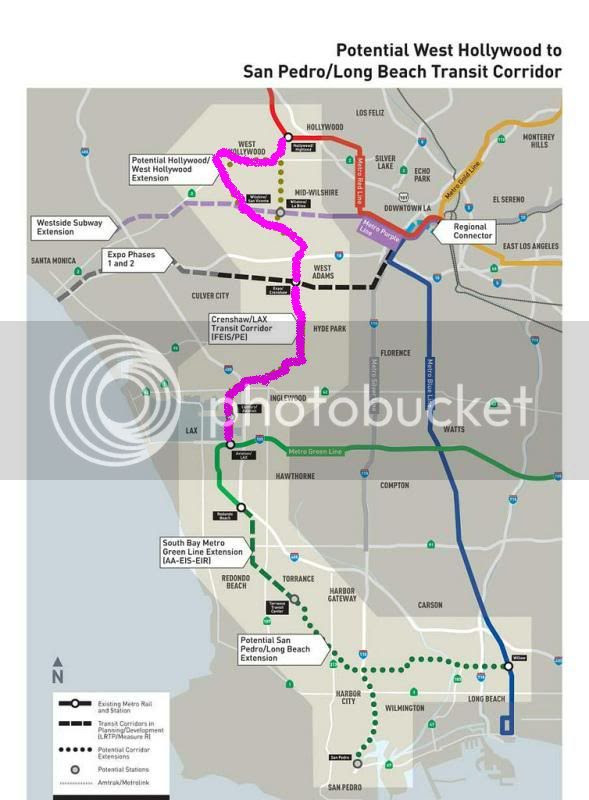 In this scenario the stops between Hollywood/Highland and Wilshire/SanVicente would be the following:
Hollywood/Highland
LaBrea/SantaMonica
Fairfax/SantaMonica
Sunset Strip
SanVicente/SantaMonica
Beverly Center
SanVicente/Wilshire
Another possibility would be for the Crenshaw/LAX light rail to run north on San Vicente to Fairfax, then north on Fairfax to Sunset and then to Hollywood /Highland with a separate light rail project entirely using the unused right-of-way in Beverly Hills to connect Century City to Sunset Junction via Santa Monica Blvd. and then down Sunset to downtown.
In this scenario, the Rose Line would have stops at the following:
Hollywood/Highland
Sunset/Gardner
SantaMonica/Fairfax
Beverly/Fairfax
Wilshire/Fairfax
There would be a transfer at SantaMonica/Fairfax for an east-west light rail connecting Century City to Sunset Junction to downtown with stops at
Century City
Beverly Hills Civic Center
SantaMonica/SanVicente
SantaMoncia/Fairfax
SantaMonica/LaBrea
SantaMonica/Vine
SantaMonica/Western
SantaMonica/Normandie
SantaMonica/Vermont
SunsetJunction with stops further down Sunset to downtown
I'm a skeptic that both lines would get built or that Beverly Hills would agree to let that right-of-way be used.
Personally, I'd keep the SanVicente to SantaMonica to Hollywood alignment as proposed and serve the Sunset Strip with a modern streetcar. The affluent hipsters who won't ride the bus might actually ride that and the tourists would love it.
But I'm only one person and I put it out there for your consideration in fairness because the Sunset Strip question comes up every once in a while. But Sunset should not be used "instead" of Santa Monica Blvd. as the primary alignment because the ridership just doesn't support it.
Posted by Dan Wentzel at 2:55 PM 5 comments: 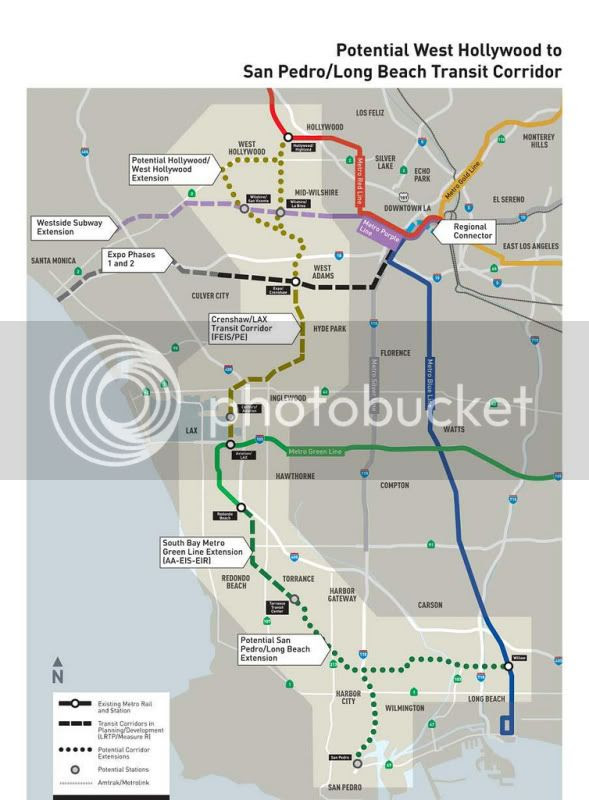 Please read by clicking this
Metro Crenshaw/LAX LRT extension study
Here are some paragraphs that stood out for me:

"Receive and file this report on the issues, options and costs to conduct an Initial Review of a possible Hollywood/West Hollywood Transit Corridor that would connect the Metro Red Line Hollywood/Highland Station to the Exposition/Crenshaw Station (currently under construction). Such a corridor would have the potential to provide a north/south transit connection with the CrenshawJLAX Transit Corridor, the South Bay Metro Green Line Extension and future potential extensions that could ultimately extend as far south as Long Beach and/or San Pedro."

"Previous studies have been conducted as part of the Crenshaw/LAX Transit Corridor for a future extension of that project north from Exposition Boulevard to Wilshire Boulevard. The CrenshawILAX Transit Corridor WilshireILaBrea Light Rail Extension Study (June 2009) identified possible connection points to the Westside Subway at La Brea, Fairfax, La Cienega or San Vicente with future extensions farther north to West Hollywood and Hollywood. Such an extension could operate along the same route as the heavy rail subway alternatives that were considered in the Westside Subway Draft EISIEIR."

"Costs to complete an Initial Review of a Hollywood/West Hollywood Transit Corridor connection to the Crenshaw/LAX Transit Corridor could be undertaken for approximately $1.5 million and would take approximately 12 months to complete following notice to proceed. Such a study would evaluate conceptual alignments, station locations, connection points with existing and planned transit lines and potential ridership and costs. Since this corridor is currently included in the unfunded, strategic element of the adopted Long Range Transportation Plan (LRTP), no funding currentlyexists for the completion of this study or the implementation of this project. The South Bay Metro Green Line Extension to Long Beach and/or San Pedro is also included in the Strategic element of the adopted LRTP. Staffing is not available to complete this work. Additional staff would need to be hired to prepare a Statement of Work, procure consultant services and to conduct the Initial Review."

If you see the map above, you will still two proposed alignments for the northern extension of the Crenshaw/LAX line.

Originally, discussion about the Crenshaw Line heading north was primarily a discussion of how to get this light rail project to Wilshire Blvd. to allow for transfers to the westside extension of the Purple Line. At that time the alternatives were considered to be LaBrea or Crenshaw. As light rail ruled was ruled out for Crenshaw Blvd. north of San Vicente, that made LaBrea/Wilshire seem like the natural extension and transfer point.

However, since those initial studies were made, transit planners and advocates are now thinking that the real northern terminus of the Crenshaw Line ought to be not just Wilshire, but the Hollywood/Highland Red Line station. Also, at the same time, the West Hollywood Transit Corridor was studied as part of the Westside Subway extension project. There is growing realization that a LaBrea alignment for the northern extension of the Crenshaw Line would miss several ridership generators such as The Grove/Farmer's Market, Beverly Center/Cedar-Sinai, City of West Hollywood, etc.

Even though the West Hollywood transit corridor was not included with the heavy rail extension of the westside subway at this time, Metro noted that the West Hollywood transit corridor had high potential and that a light-rail subway might be more competitive for federal funding. The decision to put the LaCienega/Wilshire station on the east side of that intersection means that a transfer to a SanVicente/Wilshire station as northern alignment of the Crenshaw/LAX line that runs up San Vicente to Santa Monica Blvd. would be rather easy to build.

San Vicente used to have rail on it and Santa Monica Blvd. has already been studied as a transit corridor. LaBrea just doesn't have the ridership generators to justify going straight north/south towards Hollywood. To me it is a no-brainer. A Heavy-Rail extension connecting to the Purple Line may not occur for three decades because of the cost. If we could get this alignment above with the Santa Monica Blvd./San Vicente extension of the Crenshaw/LAX as a light-rail subway, we should take it.

The next step is a fully funded study of this corridor by Metro. If you want Metro to continue to officially study this corridor, please send your comments asking them to do so at customerrelations@metro.net

I also recommend contacting Metro's Crenshaw/LAX project team to let them know that you want the Crenshaw/Expo station built in a manner that allows for a further northern extension of the line and that you support the SantaMonica Blvd./SanVicente alignment of that route at diasroderick@metro.net

As I said, in my opinion, if we can get this Hollywood-WestHollywood-SanVicente-Crenshaw-LAX-LongBeach line built, we should take it.
Posted by Dan Wentzel at 10:31 AM 4 comments: