A beautiful "Measure R plus" map from Move LA 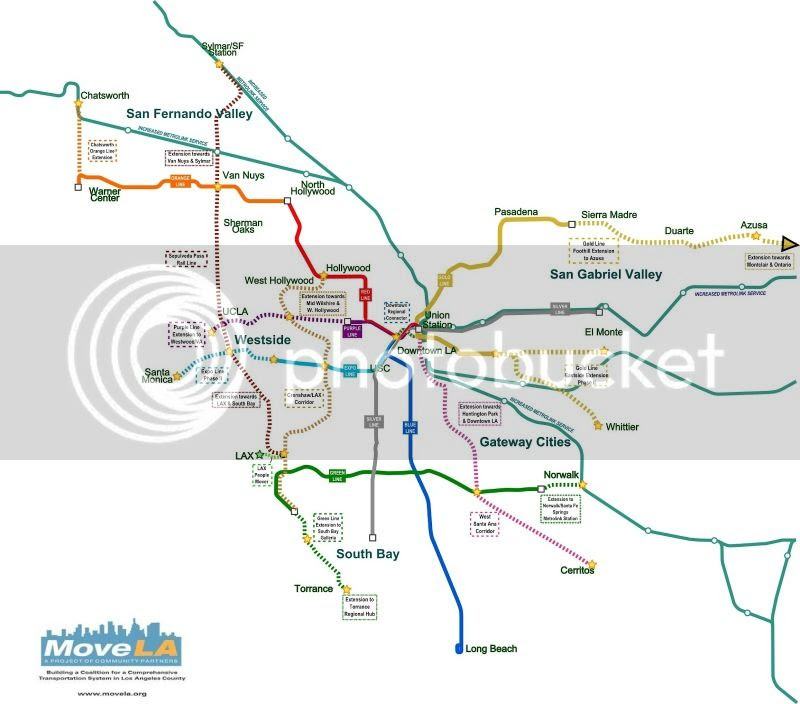 A word about Presidential visits to Southern California

Everyone on the westside who's commute was severely affected by the President's visit to Southern California, I offer you this.

Would you love to have had the Purple Line and Expo Lines as an alternative?  How about future extensions of Metrorail via the Sepulveda Pass corridor and West Hollywood?

Then call or write your Congressmember and the President and ask them to support Mayor Villaraigosa's 30/10 Plan so we can start building these projects sooner.
Posted by Dan Wentzel at 9:34 AM No comments:

Rapid 7 adds a new stop at Avenue of the Stars & Pico. Hallelujah!

Beginning Sunday, February 12th, the Rapid 7 bus added a stop at Avenue of the Stars & Pico.

When the Rapid 7 service came about with those beautiful articulated buses traveling all the way from Santa Monica to the Wilshire/Western Purple Line station many people riding on the Local 7 felt abandoned by the Big Blue Bus, as they were now waiting longer for fewer local buses that were packed like sardines.

I started blogging about this problem here:

Has Big Blue Bus Local 7 Been Thrown Under the Bus?

As part of the Rapid 7 enhancement, the "Super 7" stop at Pico an Beverly Dr. was not included as a Rapid 7 stop.  This left a very long stretch of Pico, between Westwood and Robertson, that had no Rapid stop.   Local riders saw all of these articulated buses for the Rapid whizzing by while they were stuck waiting for a more infrequent, stuffed full Local.

Beginning on January 12th, a new Rapid 7 stop was added at Avenue of the Stars and Pico.

For me, this is wonderful as this adds a faster way to access Century City between the Purple Line and Santa Monica from the other side of the Rapid 704 on Santa Monica Blvd.  Time will tell if this catches on an helps alleviate some of the capacity issues on the Local 7.

However, here is the bad news.  Both Monday and Tuesday morning, I and many other people were not able to board any bus, Local or Rapid, because they were passing stops because they were completely, and I do mean completely, full.  I got to know the people standing against me more intimately than I would have preferred.  One person trying to board at Robertson complained to a driver who wouldn't (and couldn't) let him on the Rapid 7 bus, "You're the fourth one that passed by without letting anyone on board."  Another woman pleaded with a driver to let her squeeze in (where she would go I don't know), "It's not fair, we've been waiting 45 minutes".

So there is a capacity problem with the current level of service o this corridor.  Santa Monica College apparently started up its term on Monday, so that logically explains why the buses are so packed as Pico Blvd. is the main transit access route to the college until the western phase of the Expo Line opens a few years away.  With the Rapid 7 Bus now going to the Wilshire/Western Purple Line station, it has made it so much easier for some people to get to the college and other places along this corridor.

While we are at it, put transit-only lanes on Pico (as well as several other corridors in Southern California).  But that's for another collumn.
Posted by Dan Wentzel at 9:28 AM No comments: