Has the Big Blue Bus Local #7 been thrown "under the bus"?

Has anyone else noticed a sharp decline in the Local 7 service on the Big Blue Bus since the extended and increased Rapid 7 service to the Wilshire/Western Purple Line station was instituted?

Buses come less frequently and are far more crowded. Yesterday, four #7 buses came at once. One woman stated she had waited an hour for a Local #7 bus.

This is not a criticism of the new Rapid 7 service, which seems very popular. I just wish the Rapid 7 now went all the way to the Wilshire/Vermont station so there could be a one-seat transfer to the Red Line as well.

However, as inconvenient as bus stacking is, to have FOUR buses approach Pico and Beverly around the same time last night tells me that something is off operationally. The Big Blue Bus normally runs a stellar service with clean, on-time buses, so this is not an overall criticism of them.

What is your experience on the Local 7 during the last two weeks?

Things are getting ugly on the Local 7 Big Blue Bus.

On Friday morning, I was riding the Local 7 to work, stuffed to capacity, when an angry older gentleman started saying very loudly to anyone who would hear:

- "They are treating us like animals making us stand. My rapid stop (Beverly/Pico) has been eliminated and now I am twenty minutes late for work every day. I called the Big Blue Bus and no one can tell me why. We all need to write the Mayor of Santa Monica!"

- Another woman said loudly back to him, "they've written off this corridor."

They both complained about the Rapids getting the longer buses while they were standing.

This Monday morning, the Local 7 was LATE, and stuffed to capacity. People were denied entry because the bus was so full, meaning they'd be even later having to wait for the next one. The same elder gentleman from Friday. who was pressed up against the front of the bus was shouting, "We are taxpayers! We are not animals. We don't have to be treated this way. Write a letter, make a phone call."

Now I am a big fan of the Big Blue Bus and the normally stellar service it offers, but the Big Blue Bus needs to do something. If people can no longer board a bus or get to work on time, that is their bread and butter.

Please put articulated Local 7s and/or just plain more Local 7s on Pico during rush hour.   I do not believe the Rapids are to blame and they are just as crowded as the Locals.

Maybe we should think big about this corridor and consider rush hour bus-only lanes on Pico.

The Crenshaw / LAX Line final document has been released (Yes, this matters to you.)

The Source, Metro's award-winning blog, has a post you should read entiled:  The Crenshaw/LAX Line final environmental document has been released

Yes, this matters to you who live, work and play north of the Expo Line.

The best chance to connect West Hollywood and mid-city Los Angeles to Metrorail currently seems to me to be as part of a northern extension of the Crenshaw/LAX line which has as its initial northern terminus as the Expo Line, likely to be extended to Hollywood/Highland in the future, and quite possibly via West Hollywood (as San Vicente and Santa Monica both has rail service  for decades). 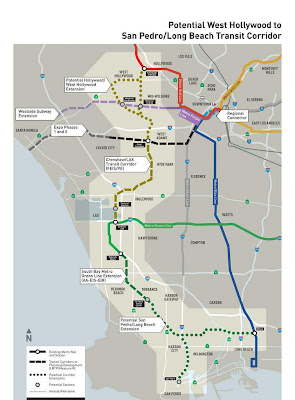 While this would not have provide a one-seat rail ride to the beach as studied for the West Hollywood transit corridor as part of the Westside Subway Extension project, it would provide a one-seat ride to/from LAX, which is more than a even trade in my opinion.

So yes, this project matters to you if you live north of Crenshaw and Exposition.

Posted by Dan Wentzel at 2:55 PM No comments:

Believe it or not, I look to London for inspiration for Los Angeles County transporation improvements.  If you ever want to know what a world class transit system looks like, go to the Transport For London (TfL) website.

While there is the "City of London", the sprawling Greater London region is a multi-modal, mutli-centered transporation wonderland with the Tube underground, the new overground rail network, light-rail, streetcar trams, a comprehensive 24-hour bus network with transit-only lanes and ferries, and, of coruse, dozens of commuter rail lines carrying people from the suburbs into the center of London. Imagine not just one Union Station, but several Union Stations (Paddington, Victoria, Charing Cross, Liverpool Street, etc.). In the future, commuter rail is going to continue to grow in popularity, especially after the Westside subway extension, regional connector and other Measure R rail projects are constructure.

Many of you are are aware that Metrolink will soon be extended to Perris Valley. Click Perris Valley Metrolink extension for more details.  But there are currently no Metrolink options for Palm Springs and the Coachella Valley.

What about Amtrak?  From WikiTravel's Palm Springs page:
Not no car agencies, shuttles or public transporation from the non-amentiy Amtrak station?  Not encouraging.

Amtrak currently has a Palm Springs Amtrak Thruway Bus Station (Route 19b) between Bakersfield and Indio.  Here's a map of connecting Amtrak Rail Lines and Thruway Bus Routes in California.

I could also fly into the Palm Springs International Airport or take Greyhound Bus Lines.  (While the Palm Springs Airport at least connects with shuttle bus service, Greyhound drops you off at the non-amenity Rail Station with no public transportation connetions.)  But I prefer rail travel when possible.

How more ideally should Palm Springs and the Coachella Valley be connected by passenger rail?

From a Riverside Press-Enterprise news article in 2008 on this topic:

Officials agree Palm Springs and other desert destinations need connections to the coast. The debate is whether Palm Springs needs Amtrak or Metrolink service.

"There is very limited service in that direction, and given the distance of the Coachella Valley from western Riverside County, it fits more in the intercity category rather than as a commuter service," explained Riverside County Transportation Commission Deputy Director John Standiford.

Others, like Rail Passenger Association of California and Nevada Executive Director Richard Silver, argue Metrolink makes more sense because commuter trains are more efficient for moving people in a region like Southern California, while Amtrak works better for long distances. "I think it will be easier to get it out there," Silver said of Metrolink service to Palm Springs.


I am not the only person thinking about this. From the Riverside County Tranportation Commision webpage on Coachella Valley Rail Service:

Currently the only passenger service in the Coachella Valley is a thrice-weekly long distance train operated by Amtrak between Los Angeles and Florida. This train is known as the "Sunset Limited". The Sunset Limited train operates through this area in the very early hours of the morning in both directions and primarily serves the leisure and tourism market.

RCTC and the State of California have been evaluating the feasibility of establishing an intercity passenger rail route between the following cities: Los Angeles, Fullerton, Riverside, Palm Springs, and Indio.

The Union Pacific Railroad (UPRR) continues its firm opposition to any new passenger service on its tracks through this area. Notwithstanding this opposition, the California Department of Transportation (Caltrans) continues to propose such service in the California State Rail Plan.

Caltrans has no unilateral powers to compel the UPRR to permit the operation of this train. Nevertheless, for intercity trains (as opposed to a commuter or Metrolink train), there are certain federal processes in place that can ultimately lead to an order compelling the railroad to operate the service.

The public agencies requesting the intercity service may be required to invest large sums in the physical infrastructure of the railroad. Some estimates place the capital investment requirement at a minimum of $500 million for a new set of tracks.

RCTC is working closely with the Coachella Valley and the Pass Areas on this issue and supports the expansion of rail service to additional areas of Riverside County.


Here is an action item for your to-do list. If you want to see more regular passenger rail service between Los Angeles and Palm Springs and the Coachella Valley, and since this may involve adjusting "federal processes", why not contact both Congresswoman Mary Bono Mack and the Railroad Policy and Development Team of Federal Railroad Administration of the U.S. Department of Transportation to let them know you'd like them to prioritize this.

The Transit Coalition has certainly given this a lot of thought:  Coachella Valley Trains

From the Transit Coalition's online discussion forum, I found the following comments on this topic very interesting:

One forum member stated the following:

For what it's worth, I looked it up, and the current Amtrak station location is apparently not the one that the Southern Pacific used (the one in the photo Nick posted). In fact, the current station is further east and a tad closer to P.S. than the old one. It's a bit surprising that the S.P. never built a spur or something to serve the area better. It seems to me, for Palm Springs Metrolink to be effective, you would need to show that there was a core body of Palm Springs commuters headed for either Riverside or some other area on a day-to-day weekday basis. With Amtrak, you could aim it for the Palm Springs/Palm Desert golf/art vacation folks, and use Surfliner-ish equipment. I remember in the '80s, Amtrak was aiming the San Diegan squarely at Disneyland/beach/vacation travelers, and it was something of a surprise that commuters would take the morning train into Los Angeles. The same thing could be tried with Palm Springs.


Another member of the forum stated the following:

In the past for the Coachella Music Festival, Amtrak ran special service called the Coachella Express that connected to a shuttle bus (kinda like Metrolink's Del Mar horseracing train). Outside the Sunset Limited, that would have been the only other time passenger train service rolled through the Coachella Valley in recent memory.


A third member of the forum had this interesting idea:

I think that this would be a great stop on a future high speed rail line between LA and Phoenix. LA-Phoenix is the 27th busiest air route in the world and would easily sustain frequent high speed rail service with a local stop at Palm Springs and/or Indio on the way. I think the travel times and frequencies for LA-Palm Springs on a high speed line would be much more appropriate than Metrolink. However, Metrolink has a marginal chance of actually being implemented in the next decade or two. LA-Phoenix high speed rail could be built as an extension eastward from the Riverside branch of phase 2 California high speed rail.


Of course, however we would eventually get to Palm Springs or the Coachella Valley by passenger rail, once you get there, how do you get around without a car? Well, that's for another blog post. In the meantime, you can check current bus services with the SunLine Transit Agency.

As an gay man who is no longer twenty-something, I may find myself in Palm Springs more often as I get older and will keep you posted of transit improvements both there and in Southern California.