What will eventually be the northern extension of the Crenshaw/LAX Line to Hollywood?

On the new Expo light-rail line there is a stop at Crenshaw & Expo, which will eventually be a transfer to the proposed Crenshaw/LAX light-rail line.  Most transit advocates in Southern California see the natural northern terminal of the Crenshaw/LAX Line not at the Expo Line where the first operating segment will end, but past Wilshire Blvd. and the Purple Line to the Hollywood/Highland Red Line station.

When Metro finally studies this transit corridor they will have to consider the needs of all the stakeholders in the area.

There will be those people who primarily care about getting the quickest and most direct route between Crenshaw/Expo and the Hollywood/Highland station and they will want La Brea as the alignment obviously.

Then there will be people who live, work, play and want to travel to/from high ridership destinations in between these two points, especially West Hollywood and surrounding destinations, who were disappointed in not being part of the Westside subway extension and whom voted most heavily in favor of Measure R, and their primary concern will be accessing Metrorail at all.

Metro will need to balance the cost of building a longer alignment to provide access to more stakeholders with the desire of those who primarily want speed through this area to create an alignment that serve the most people with the maximum ridership. ALL of the potential alignments through this area would still be quicker than riding a bus through traffic.

Here are the most likely potential alignments of the northern extension of the Crenshaw/LAX line as shown in this Metro study map: 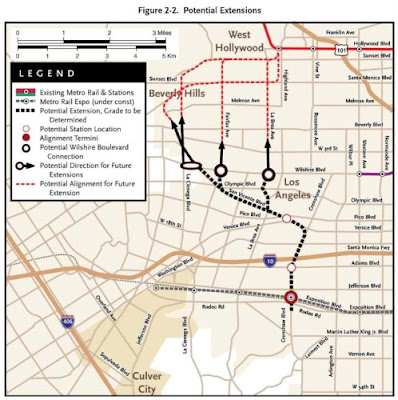 Here are my guesses of the most probable potential stops with their accompanying ridership destinations, along with the length of these potential alignments connecting Crenshaw/LAX at the Expo Line station with Hollywood/Highland:

(This route misses nearly all of the high-ridership generators in this area, and would be sort of like running the Blue Line up Alameda instead of the heart of downtown to Union Station.  You'd get there the quickest, but miss where the riders are actually going in between.)

(As this was the original northern alignment of the Red Line before the NIMBYs thwarted the Purple Line extension through Hancock Park back in the 80's, there would be sweet justice of a Fairfax alignment eventually being built.)

(This alignment has the advantage of the portion north of Wilshire as already having been studied by Metro as part of the Westside subway extension.)

Why not have two or three separate Metro rail lines some people might ask?  Why not have one line traveling only on LaBrea for speed between Hollywood and LAX and another separate line entirely that integrates West Hollywood and environs for access into the Metrorail system.  Why not indeed?

Well, to be frank, two or more lines won't happen because of MONEY -- because nearly all of this light-rail line will have be constructed underground.   (Look at the current difficulty in getting the Wilshire Blvd. subway extension and the Regional Connector projects funded and built.)

If we are lucky and the pieces somehow come together, we will get to have one light-rail subway funded and constructed through this mid-city, mid-west side area.  ONE.  And it is going to need to serve all the stakeholders, or as many stakeholders as possible, in this area, not just those transit riders traveling between Hollywood and the airport quickly, but also those who live, work and play in points between such as the Grove, Beverly Center, Cedar Sinai, West Hollywood, the Sunset Strip, and their environs.

Not just because it is geographically in the middle between the other alignments and in the middle with the lengths of these alignment, I think Metro may end up deciding that Fairfax is the best compromise alignment between ridership destinations and speed through the area, but we will see.  Everyone will have their vocal opinion I am sure.  Hopefully, either the SanVicente/SantaMonica alignment or the SanVicente/Fairfax alignment will be built in our lifetimes.

At markp, while the methane gas explosion was the straw that broke the camels back and was the catalysts for Congressman Henry Waxman to push through Congressional ban on tunneling, it was also a perfect way to allay the fears of many of the fears of NIMBY activists in his region.

Dan,
As you know I'm an advocate of Crenshaw Line Extending up Fairfax Ave to LACMA and Farmers Market, Fairfax & Santa Monica, then to Hollywood & Highland + a Santa Monica Blvd Streetcar. I'm curious to hear what you think about Szabo's Metro Extension on Sunset Blvd, http://www.voteszabo.com/transit_vision_map#.Un_Y55T5mq4