As we get closer to Metro selecting a "Locally Preferred Alternative" for the Crenshaw Northern Extension Project, a new round of community meetings is about to take place.  On the menu for discussion will be a new "hybrid" option (seen below). 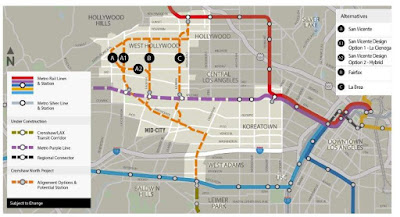 The more I study the "hybrid" alignment (A2 plus A/A1 above) for the Crenshaw Northern Extension Project the more I like it. At first the geometry of the line threw me, but this option hits all the major job/entertainment/retail generators north of Wilshire. 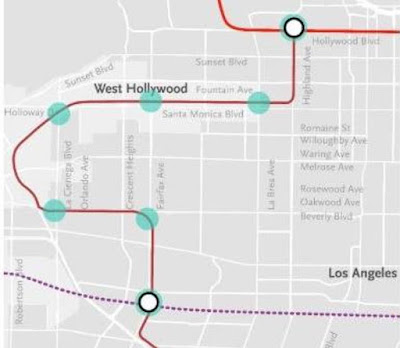 Going to where people actually want to go is what will make this line the tremendous success it is destined to be.  People don't just travel through this area, they travel TO this area and within this area.

Let's just remember why we need this line.  It intersects so many other Metro lines (Green, Expo, Purple, Red) and major bus corridors (Santa Monica, La Cienega, Fairfax,,etc.) that it will increase ridership on the whole system.  Plus, this extension will vastly increase mobility for disadvantaged communities with direct connections to job and entertainment centers like Cedars-Sinai, Beverly Center, The Grove, and West Hollywood.

There is a minority of people out there that prefer La Brea for this alignment. They look at La Brea on the map, see a "straighter" line, and say, "We want speed, speed, speed!  They don't seem to care about direct access to any of the ridership generators between Wilshire Blvd. and Hollywood Blvd. further west (like Cedar Sinai, the Beverly Center, the Grove, West Hollywood, etc.).  This is why I do not agree with them:

As a daily user of the transit system I think to myself, "If the options are: (A) riding a few more minutes underground to go directly to the location I actually want to go (West Hollywood, Cedar Sinai, Beverly Center, The Grove, etc.), or, (B) getting off the train at La Brea and THEN waiting above ground to transfer to a bus and THEN riding through heavy surface traffic to finally get where I actually want to go, well (B) really does not seem like the "speed" option after all, does it?

I'm sure a nurse riding from Leimert Park to her job at Cedar Sinai would rather take a quick one-seat ride underground rather than ride to Beverly/LaBrea, wait for a bus at LaBrea for however long, and then ride stop and go in heavy traffic to finally get to her job.  When you conceive the whole trip, the notion of the "speediest" option changes.

I say build this line and put the alignment directly stopping where people actually want to go.  And make its northern terminus at the Hollywood Bowl to help relieve nighttime Hollywood Bowl traffic there.

I believe the few extra minutes of curves required to make these stops, which no one will notice or care about underground, will still be MUCH quicker than sitting in heavy surface traffic above ground, and will not at all be a deterrent to its success.

I also reject talk of breaking this project up separately into “two-lines” as there is only going to be one line built in this area for decades.  By the time all of the current Measure R and Measure M projects are finished it will be decades for a second line is even proposed.  So don't be fooled or distracted by those people advocating a  so-called "speed" line on La Brea today while leaving second "access" line to be proposed and built at some vague date decades later (or never).

There are also those who will wonder, "what about the people traveling from the San Fernando Valley to LAX?"  Good question! I think most of them will likely use the coming Sepulveda Transit Corridor Project (seen below), but will still find this hybrid underground alignment MUCH quicker than sitting in surface traffic.

The next round of Metro Community Meetings for this project are soon.

I will see you there!  You can also submit your feedback about this line to crenshawnorth@metro.net.

Although I very proudly sit on the City of West Hollywood's Transportation Commission, this blog post is my own opinion.  I am not claiming to speak for the Commission, the City Council, or our hardworking city staff.
Posted by Dan Wentzel at 9:33 AM

Looks like an amusement park ride for West Hollywood and it's not within the realm of affordability. If we're advocating for something beyond the funding of Measure M, the truth is we need a direct north-south connection from Expo/Crenshaw to up to Hollywood/Highland that the La Brea route provides (and yes, on to Hollywood Bowl is a great idea!) And we need a Santa Monica Blvd subway, at least from Vermont to Century City, eventually extending east to Union Station and south to LAX. The various serpentine Crenshaw alternatives to the LaBrea route (and especially this hybrid) add a huge amount of time and expense to the route. If I want to go from Fairfax and Santa Monica to Wilshire /LaBrea or Wilshire/Fairfax areas on the Purple Line, look at the ridiculous tortuous route I'd have to take. The fact of the matter is BRT routes and LRT routes in far-flung suburban areas of the county are sucking up the money we need for building desperately needed rail transit in the urbanized middle of LA.

I cannot agree with the LaBrea route, but Santa Monica Blvd. line from Century City to Vermont and then downtown via Sunset to Union Station sounds amazing.

The direct connection to the Purple line at Fairfax and Wilshire will facilitate a vastly superior transfer to the San Vicente/ Wilshire stop, as well. Having to walk over 1,000 ft. to transfer to the Purple Line would be a massive mistake, even if this is a below-ground transfer (see the long block 14th Street transfer from IRT to IND lines, which is only 830 ft).