A Proposal for a New Entertainment Shuttle for Hollywood & West Hollywood

In West Hollywood, pre-pandemic, West Hollywood had two free entertainment shuttles which ran Friday and Saturday nights, the Pick Up Line and the Sunset Trip.  (The Pick Up line also ran on "Sunday fundays" and certain holidays.).

The advantages of a free shuttle service serving nightlife are obvious.  It reduces the amount of traffic in the area, reduces drunk driving, reduces the demands on parking, and provides more customers to businesses in these districts.  These free shuttles ran old trolley cars and played hip music and have a fun atmosphere too them.  You can see their respective routes below: 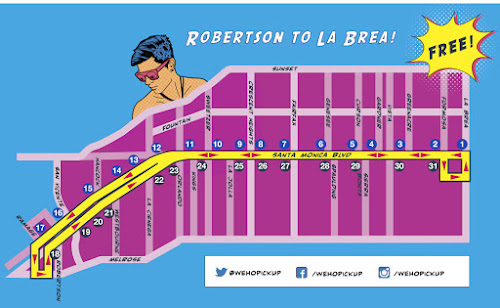 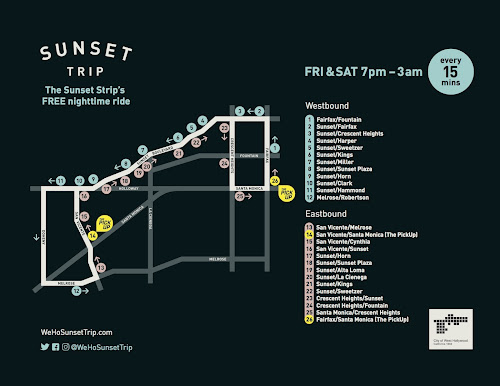 A proposal I have is to modify the Pick Up route, so the western turn around also serves a part of Sunset Blvd.  This will take people up the hill to part of the western Sunset Strip and provide shuttle service to places like the Roxy, the Whisky-a-Go-Go, the Rainbow Room, and the Viper Room, among others, as seen below; 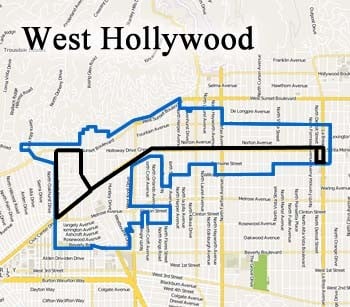 For future planning, I want to propose something bigger and grander involving both Hollywood and West Hollywood.  A "Super Entertainment Shuttle" if you will.  It would serve the Rainbow District, the Sunset Trip, and currently unserved "Theatre Row", as well as taking people to clubs in Hollywood and the "B Line" ("Red Line") Subway.  I envision both a clockwise and a counterclockwise loop.  Please see below.

Two notes:  (1)  I'm currently envisioning the entertainment shuttle heading north from Sunset to Highland rather than LaBrea, because Hollywood Blvd. is often a standstill between Highland and LaBrea on Friday/Saturday nights;  (2) Also, those numbered blue dots are mileage markers, not proposed stops.  The whole loop is slightly under ten miles.

Granted, this shuttle would require cooperation between both the Cities of Los Angeles and West Hollywood, and it will be months before all of these types of businesses re-open.  But we plan for the future today.

Imagine someone taking the Red Line to Hollywood, to then catch the shuttle to see a play on Theatre Row or a set at The Comedy Store; and then heading for a drink at The Rainbow Room, or Mickey's; and then head back to the subway, having left the car at home.

What do you think?