How Metro Can Do Better Next Time

This is not a bash Metro post.  I believe in Metro's mission, want Metro to succeed, and for Los Angeles County to have a world class transit system on the level of New York, London, Paris, and Tokyo.

But let's be honest.  Metro's rollout of its Service Changes on June 27, 2021, and its NextGen Service plan, was poorly executed.  Metro's new CEO Stephanie Wiggins admitted as much in a note on fares, enforcement, and service changes.  It is welcome to see Metro publicly acknowledge there was a problem.

Kenny Uong, who is quickly making a name for himself in Southern California for his transit advocacy and enthusiasm blogged on Twitter his experience seeing confused riders all over the system, who had no idea that the service changes were happening or what they were, and bus stops still having old signage. 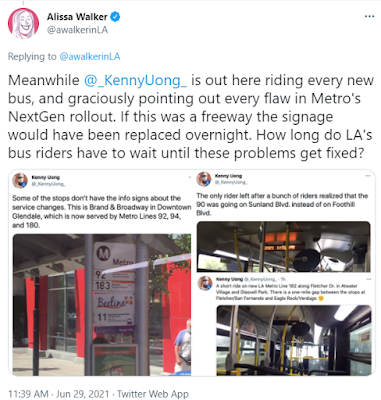 As of writing this post, Metro still had old bus service maps from 2017-18 on its website, which is certainly not helpful for anyone trying to figure out how to navigate the current system today.  Not everyone riding Metro has a smart phone or can easily use an app like Transit or Google Maps.

Metro had also issued a confusing "TAP where you can" statement, with bus operators quoting fares that riders were unprepared for paying.

What we should have been doing this week is celebrating Metro's more frequent service on certain lines and the rollout of the new bus lanes on Alvarado.  Unfortunately, this was all overshadowed for many riders, especially for those who depend on transit as their primary source of mobility.

However, this can be a learning opportunity.  Here is how Metro can do better when rolling out service and fare changes in the future:

In short, have everything in place for the ridership BEFORE enacting service changes or fare increases.

It is truly wonderful that Metro is expanding rail service throughout the County which has my full support.  Now let's also give its bus system the upgrade its ridership deserves, like transit lanes on all major corridors. 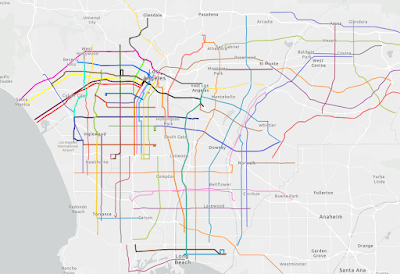