Last night at Plummer Park in West Hollywood there was a community forum on the progress of the Westside Subway Extension Project. (You might have noticed drills on Wilshire and Santa Monica beginning to take soil samples.) This project is in environmental review. For more information about this project, please visit Metro's website at http://www.metro.net/westside
There are still three more community forums within the next week and I encourage you to attend to learn more and to communication your support and suggestions:
• Thursday, August 6, Santa Monica Public Library, 601 Santa Monica Boulevard, Santa Monica
• Tuesday, August 11, Beverly Hills Public Library, 444 N. Rexford Drive, Beverly Hills
• Wednesday, August 12, Westwood Presbyterian Church, 10822 Wilshire Blvd, Los Angeles

All the meetings are from 6:00-8:00 PM. The material presented will be identical at each meeting (though the crowds will be different), so pick the one that is most convenient for you.
I am still very hopeful that the Westside Extension will be build with Phase 4, which includes the Santa Monica Blvd. subway through West Hollywood, also known as Alternative 11: 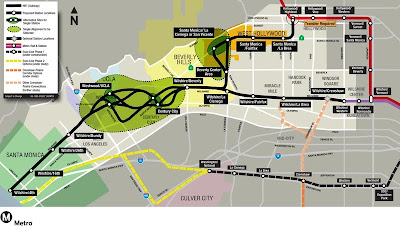 There have been a couple of adjustments to the Santa Monica Blvd. alignment you should know about. As you can see from the above map, there was one alignment at La Cienega and one at San Vicente. The La Cienega alignment has been eliminated because of the inability to design that hard turn. The alignment will run south via San Vicente and the stop will be on Santa Monica Blvd. between La Cienega and San Vicente, right in the heart of West Hollywood. At last night's forum there was lots of comment about how and where to design the Beverly Center area stop. There will be specific Metro forum's this fall around specific stops. If you intersted in how the La Brea, Fairfax and west of La Cienega but east of San Vicente Santa Monica stops or any other stations along the alignments are designed, be sure and attend those upcoming Fall meetings.
This project is current divided into five phases:
Thank goodness Measure R passed. This will fund Phases 1 through 3. At the Forum, I asked the money question: What will determine if Phase 4 will get built? After all, there is rock support in the community for this project. West Hollywood voted 83% in favor of Measure R.
It basically comes down to money. Heavy Rail Subway is the most expensive form of transportation construction. Can Phase 4 be competitive for federal matching funds? That will be the determining factor to getting funding for this project. So start writing your letters in favor of federal funding for this project to Congressman Henry Waxman and Senators Feinstein and Boxer.
What happens if Phase 4 doesn't get the go ahead? That's pretty sad. A lot of people who supported Measure R and who support this project will be heartbroken.
There is an alternative that I have heard being whispered as a possible backup by various transit advocates. It would involve incorporating the Pink Line through West Hollywood with the Crenshaw Line project under study right now.
For more information about the Crenshaw Line project go to http://www.metro.net/projects_studies/crenshaw/default.htm
Here's a map posted on the Transit Coalitions discussion forum by Darrell:

Instead of a Heavy Rail subway like the Red Line and Purple Line, in this alignment, the Pink Line would be a Light Rail alignment line like Blue, Green, Gold and Exposition Lines. This would not necessarily be all at ground level. Portions of the Blue, Gold and Exposition lines run underground and there will be grade separated crossings at the busiest intersections.
This northern extension of the Crenshw alignment would continue light rail up from Crenshaw/Expo up Crenshaw to San Vicente and then head northwest up San Vicente and resume the Phase 4 alignment in West Hollywood.
The advantage of this alignment is that light rail is cheaper to construct than heavy rail, therefore the numbers would be more advantageous for federal funding. Also, Metro will have already invested millions of dollars studying this corridor, received feedback and comment on station locations and design, and have a whole lot of heartbroken people on their hands. There is also a regional benefit. People in Hollywood, West Hollywood, Beverly Hills and points south will more easily access LAX. Basically, West Hollywood and the Beverly Center area would be trading easier one-seat access to the Westside for easier access to LAX.
I still fully support Alternative 11 for the Westside Transit Corridor Extension Project. That is why 83% of West Hollywood voted for Measure R. I believe it is the right one for the region's future. However, while this light rail alternative may not be the most preferred or most desirable rail service to this area, it is in my opinion fully acceptable and preferable than the alternative if Phase 4 is not constructed, which is nothing.
Posted by Dan Wentzel at 8:48 AM

And that is only after the Wilshire line has reached Westwood and provides key destination to drive the branch's productivity/cost effectiveness.

The branch will be delayed until two-three decades out. Given the structure of the federal funding process the Wilshire alignment and downtown Connector are more competitive.

This process is a number oriented sport, and these are the hard facts that boosters of the branch have to grasp.

I don't think anyone really thinks the Santa Monica branch would be built prior to either of those two projects.

But that's not a reason not to commit to doing it down the road.

Individuals have consistently mispredicted that the Santa Monica Blvd. alignment would have been dropped by now and that just hasn't been the case.

In fact, the Project Manager has consistently said that including the Santa Monica alignment works.

I support the pink line and consider it one of the most important lines in Los Angeles. I would prefer heavy rail subway, however, there would be enormous advantages to making the Pink Line, which requires a transfer at Hollywood and Highland, light rail because it could easily connect to the Crenshaw line and LAX without requiring two transfers. Also light rail may be cheaper to construct (or maybe not). The disadvantage of Light Rail would be that it would not carry as many people. Anyhow, regardless of what form the Pink line takes, I am all for it. I disagree with the naysayers, I think this line will be built in the next 20 years.

I agree on what Dan Wentzel says that anyone really thinks the Santa Monica branch would be built prior to either of those two projects.

Heavy rail pink line is going to be heavily used to connect the valley to Hollywood, the Beverly Center area, CC, Westwood.

Connecting to Crenshaw is useless; it would be about 1 1/2 hours from Hollywood to LAX since light-rail stops frequently.

What about grade separations for our existing rail lines? The Blue and the Gold aren't as safe as they should be and cause major noise impacts in their communities.

The Expo line is being built mostly at-grade, raising similar issues. Shouldn't we go back and improve our existing light rail lines before we undertake new lines in West Hollywood?

I'd like to see this line too, but not if it means cutting corners in South LA.

I appreciate your concerns, DJB, but I just do not agree that the Blue Line and the Expo Line should be wholly grade separated. There just isn't the same density or ridership.

I do support grade separating certain intersections, but not the whole ting.

Of course we should make sure our rail lines are as safe as possible. However, we cannot eliminate all human error.

I also disagree with the idea that building the Pink Line means "cutting corners" in South L.A.

This is not about crosstown rivalries. This is about ridership, density, land use and economic development.

South Los Angeles and East Lost Angeles are NOT being discriminated against because they both gets light rail lines and the Westside gets a couple of heavy rail lines.

Right now, South L.A. has the Blue Line, Green Line, Expo Line, will get the Crenshaw Line and Harbor Subdivision. There just isn't a credible case to make that South L.A. is somehow being discriminated against, when it has gotten the most rail service thus far. East L.A. is getting the Gold Line with probably two branches, one to Duarte and the other to Whittier.

The Westside has gotten nothing thus far and the San Fernando Valley has a busway.

I just cannot and do not support your argument that South L.A. is somehow being discriminated against.

Keep in mind, I am a firm believer that Santa Monica Blvd., Sunset Blvd., Ventura Blvd., Venice Blvd., and numerous other streets should also have modern streetcars running on it as well.

In my opinion, we don't have enough at-grade rail in Los Angeles County.