What if the Santa Monica Blvd. transit corridor were light rail?

When Metro issued it's recommendations for the Westside Subway Extension, it sadly did not include the Santa Monica Blvd. spur we were hoping for. In fact, Metro even cut out a future heavy rail (HRT) transfer structure to join the Purple Line at La Cienega. Disappointing news, I know. It is possible that if the Mayor Villaraigosas's 30/10 plan goes through that there might be extra money available down the far road, but that is a LONG shot. Every region of the County will want an "extra" money that shows up from fast tracking Measure R.
On the bright side, and I am by nature an optimist, Metro's staff recommendations did state that West Hollywood had high potential as a transit corridor and stated a light-rail subway might be more viable to qualify for federal funding.
So what would this corridor as light rail look like potentially?
Let us assume that the Santa Monica Blvd. corridor from the Westside Subway extension, "the Pink Line" is planned for light rail (LRT) and looks like this below: 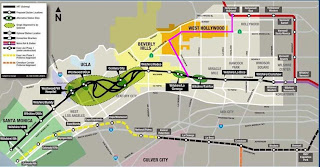 As you can see below the Pink Line and planned Rose Line (Crenshaw/LAX) can be connected very easily via San Vicente. (Both Santa Monica and San Vicente were rail corridors for decades). 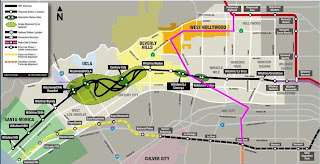 The plus side of this option isn't just the one-seat ride from LAX to Beverly Hills, West Hollywood and Hollywood, but the possibility for future light rail expansion as seen below: 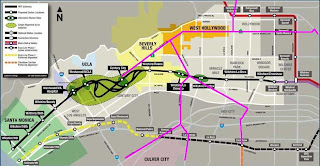 Very exciting to me is the possiblity of extending this light rail project each from La Brea & Santa Monica to Sunset Junction and then southeast on Sunset to downtown. Another possibility is extending this south on La Cienega to Venice Blvd. where it could to Venice Beach or LAX.
However, these extensions are all far in the future.
If there is to be any Metrorail on Santa Monica Blvd. or serving West Hollywood at all, be it HRT, LRT or even modern streetcar, we need to begin lobbying to keep this transit corridor alive for further and future consideration.
We may be very disappointed that the Santa Monica Blvd. corridor is not moving forward as part of the Locally Preferred Alternative for the Westside Subway extension at this time, and I certainly am. But don't get discouraged. Look how far this transit corridor has come in consideration and energy in such a short period of time.
Come to the next Metro meeting and/or write your comments to Metro stating that you want the Santa Monica Blvd. transit corridor kept alive for the future. It will benefit not just West Hollywood, but the entire region.
Posted by Dan Wentzel at 10:29 AM

Great suggestions Dan! I like all the routes you mentioned especially the Venice Bl-La Cienega-San Vicente route. That would be very convenient for me and others who want to get to West Hollywood or Hollywood from Venice Bl. The space is definitely available on those wide streets for a LRT.

I took a little liberty with your third option and modified it... hope you don't mind :)

Hi Dan, I am also excited by the prospect of a light rail based subway continuing under Sunset Blvd from Santa Monica Blvd in the direction of downtown. It is for this reason that I'm wondering whether the "pink line" shouldn't continue under Santa Monica without turning toward the north to Hollywood/Highland. Passengers could transfer to the Red Line at Santa Monica/Vermont and travel northbound to Hollywood/Highland. This would make such a project cheaper to build. I'm writing this as a New Yorker who's visited LA a number of times so take that into account with my suggestion. How long is the Red Line ride between Hollywood/Highland and Vermont/Santa Monica? It's a tolerable amount of time if I remember correctly.

Although I love the idea of Light Rail along Santa Monica Blvd in West Hollywood, I do believe the crenshwaw line should shoot straight up La Brea to Hollywood & Highland red line station rather than doing this out of the way curve to serve SM BLVD.

I believe your work in advocating transit along the SM BLVD corridor should be directed at getting the Metro Light Rail Silver line advocacy back up; this way, weho has 2 metro rail lines and one great transfer point at SM & La Brea with the silver line going through Echo Park and into Downtown out to El Monte.

Anonymous said...
This comment has been removed by a blog administrator.
October 16, 2010

By the way, the Silver Line Light Rail is already in Metro's Tier 2 unfunded Long Range Transportation plan [LRTP], we just need to advocate its extension into WEHO towards Century City. The Right of way is already in place on SM BLVD through Beverly Hills and Century City to the 405

Extending Crenshaw up LaBrea is a mistake. There just aren't ridership generators there. The alternative route to San Vicente/Santa Monica Blvd. is Fairfax, not LaBrea. Fairfax would catch the Grove, SMB and even a stop on Sunset around Gardener.

The Silver Line proposal is an interesting one, but I would build the Century City to Hollywood portion first and then extend it Eastward to downtown and beyond.

The WeHo corridor was considered Tier 1 and the old Silver Line concept is Tier 2.

You are right Dan, the Fairfax alignment would probably be best. Keep the forum going!!!!

Could a subway LRT be converted to Heavy Rail? Or are the tunnels different diameters? I'd like to know the coast differential between the two.

Thanks for the interesting site!

Dan wrote, "The alternative route to San Vicente/Santa Monica Blvd. is Fairfax, not LaBrea. Fairfax would catch the Grove, SMB and ..." I couldn't agree more. I love the idea of a regional line from Hollywood & Highland, SMB/LaBrea, SMB/Fairfax, Fairfax/Farmers Market, FairFax/Wilshire/LACMA, Pico/San Vincente, Crenshaw line to LAX with further extension to Torrance. I predict that line would outperform all but Purple Line. Its got all the attractors. Provided there's enough subway portions, it would have plenty of speed as well.
Thomas Dorsey