What next for Santa Monica Blvd. and West Hollywood after the LPA recommendations for the Westside Subway Extension?

Metro's Planning and Programming Committee released its recommendations for the Westside Subway Extension this morning:
(Although I have admit it is a little eyebrow-raising that this document was released BEFORE the Public comment period was officially over.)
Metro's Planning and Programming Committee recommendations for the Westside Subway Extension
As I expected and as Metro has been hinting at for months, they will go with Alternative 2. This means extending the Purple Line to the V.A. in Westwood through Century City. This means that the full Purple Line extension to West Los Angeles and Santa Monica will not happen at this time. It also means the hoped for heavy rail subway connector through West Hollywood will not happen either, especially as Metro will is cancelling any plans for a heavy rail transfer structure at the La Cienega station:

This structure is not recommended for inclusion in the LPA. The cost of $135 million is not within the available funding reserved through the LRTP for the project. Additionally, the heavy rail option for the West Hollywood Line did not perform as well as anticipated when evaluated against FTA New Starts criteria in the DEIS/DEIR. As such, the high cost of the connection structure is not justified when there may be alternative, less costly, solutions to serve the route through West Hollywood.

While the DEIS/DEIR identifies that the West Hollywood line has very high potential as a transit corridor, further study is needed to determine if a more cost-effective transit alternative such as light rail subway may provide a project that would be more competitive under federal funding criteria. If such an alternative were selected in the future, there would not be the need for a heavy rail connection structure.

So there are really three basic options for those of us who dream of a Santa Monica Blvd. metro rail line.
(1) Since federal funding is out and there will be no transfer station at La Cienega, find the money from somewhere else for a heavy rail subway. Good luck with that. Metro will spend the next thirty years paying off Measure R.
(2) Metro does state that a light-rail subway may be possible. This option would most likely be the Crenshaw-north option, a northern extension of the Crenshaw Line from Crenshaw/Expo up San Vicente to Santa Monica Blvd then over to Santa Monica/LaBrea and then up to Hollywood/Highland. Now there is no designated money for this either, but it would be less expensive to built than a heavy rail spur of the Purple Line. 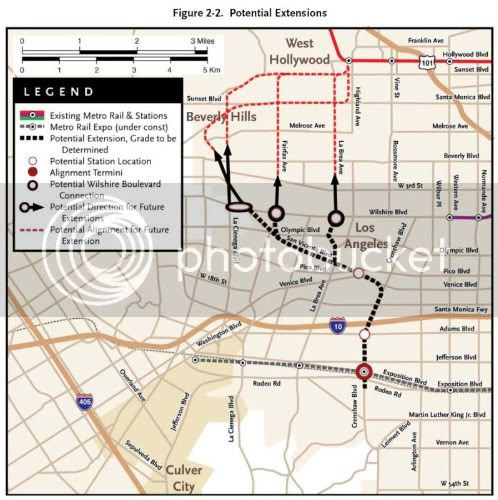 Another possibilty is a separate light-rail subway project involving Santa Monica and LaCienega Blvds. to Venice Beach or LAX.
(3) This would be the at-grade streetcar option.

The advantage to this is that this could be built within five years with a coordinated effort. It it were put in a transit only lane, it would move very well. Yes, two weekends a year, during the gay pride festival and Sunset Junction street fair, there may have to be substitute buses running, but the benefits to the other 352 days a year a worth it. This could use the back end of Beverly Hills ROW that Metro is sitting on. Would people be prepared to give up a lane of traffic/parking for this? I would, but I suspect some motorists and store owners may object. But who are we designing our transportation network for? People or single-occupancy autos?
NO ONE has been a bigger advocate for a Santa Monica Blvd. rail line than me. Today's recommendations for the LPA are hugely disappointing. But I encourage those others who support a rail project on Santa Monica Blvd. to get behind the less expensive and therefore more feasible options of a light-rail subway or at-grade modern streetcar running in a transit only lane. Personally, I like the light-rail extension of the Crenshaw Line. There would be a one-seat ride from LAX to/from Beverly Hills, Beverly Center, Miracle Mile, West Hollywood and Hollywood. That is no small compensation for not having a one-seat ride to the beach.

However, I am just one person and would like to hear your suggestions about how we should proceed from here forward.
Posted by Dan Wentzel at 9:30 AM

Greetings,
I live a few blocks from the future Crenshaw line in Hyde Park, so I'm hoping that is the option that happens. We need a crosstown N-S line, from LAX to West Hollywood is perfect as it crosses the Green, Purple, Expo and maybe the Red lines. It also follows the historic streetcar route up San Vicente that started West Hollywood originally!

The Pink Line was never a very good idea. It was too short to be useful. Now if it had gone from Santa Monica THROUGH Hollywood/Highland to North Hollywood, that would have built a comprehensive HRT network for the region.

But, given that the Pink Line would have terminated at Hollywood/Highland, the region could be much better served by a Crenshaw Corridor extension than by the proposed Pink Line.

Imagine the potential connectivity from a system like this:

The Pink Line would have connected with the Red Line, the Purple Line, and the I-405 Sepulveda Pass Line.

A Crenshaw Corridor line, done right, could connect with the Red Line, the Purple Line, the Expo Line, the Green Line to Norwalk, and the I-405 Sepulveda Pass Line (potentially the Green Line).

I'm sorry, but I didn't see or hear anything about the Feds not on board with 30/10. Aren't we still waiting to hear how the meeting went with the mayor and the president?

I don't really see much appeal in non-grade-separated light rail over buses. Sure, it's a little nicer; but it's no faster, it's moreexpensive in the short term, and it makes it that much harder to get grade-separated transit in the future.

So in the short term I'd like to see a transit-only lane through WeHo connecting Hollywood/Highland and the purple line, with a "pink line" bus on it making 2-3 intermediate stops, timed to take on passengers transferring from the red/purple lines. It will be as fast as street-level LRT, only a little less nice, and won't preclude implementation of HRT when money becomes available.

In the long term, an HRT pink line is the only sensible solution; a three-seat ride between Santa Monica and NoHo will not draw passengers from private cars and commuter buses.

The Pink line HRT extension really doesn’t make sense, since the line would terminate at a conjoined stub-end station at Hollywood-Highland or Hollywood-Vine. [Keep in mind that Hollywood-Highland station is closed whenever there’s a big event at the Kodak Theatre. If it was to be a major transfer station, closing it would be ludicrous.]
This transit corridor would be much better served by extending the proposed Crenshaw LRT line as a subway under La Brea, Fairfax or San Vicente to Hollywood-Vine
[Funny… The alignment up Fairfax was the original alignment of the Red line until you-know-who intervened...]

The Pink line HRT extension really doesn’t make sense, since the line would terminate at a conjoined stub-end station at Hollywood-Highland or Hollywood-Vine. [Keep in mind that Hollywood-Highland station is closed whenever there’s a big event at the Kodak Theatre. If it was to be a major transfer station, closing it would be ludicrous.]
This transit corridor would be much better served by extending the proposed Crenshaw LRT line as a subway under La Brea, Fairfax or San Vicente to Hollywood-Vine
[Funny… The alignment up Fairfax was the original alignment of the Red line until you-know-who intervened...]

If I were West Hollywood and the rest of the area served by a potential Pink line, I would lobby very strongly for separate federal money to create connection structures for both the La Cienega Purple line station and the Hollywood/Highland Red line stations. Provide the stub ends of the Pink line, and create the possibility of a one-seat ride in the future from North Hollywood to the Westside. By the way, La Cienega should be a Purple/Pink transfer station - the proposed connector means that Wilshire/Rodeo would have been the first Purple/Pink station.

If this type of forward-thinking planning is implemented, it will be much easier to create momentum to raise money to complete the line. Not only would there be the huge local support, Valley and Westside residents would be screaming for the one-seat ride.

As for the Crenshaw line, I wouldn't try to stretch it to make it fit the Pink line footprint. A straight extension northwards through Wilshire/La Brea on the Purple line along La Brea terminating at Hollywood/Highland would be a great addition to the Metro system.

Now is the time to start planning for a bus link from Hollywood/Highland to Wilshire/La Brea or Wilshire/LaCienega. This could be set up in days, requires no construction (apart from putting up a few bus stop signs) and is very cheap.

So cheap, that LADOT could run it, or even the City of West Hollywood could do it. The important thing is frequent service that runs as often as the Red and Purple Lines do (that is, every five minutes during rush hours, 10 minutes off peak, 20 minutes late night and weekends. We have 10 years to plan for it, so let's get started!

Dan,
Although the feds would clearly rank a north-south line in the Hollywod-West Hollywood-MidWilshire-Crenshaw-LAX-Torrance as a higher passenger priority that could possibly slip in under the 30/10 umbrella, I think you hit the right approach for additional transit coverage in Century City, Beverly Hills, West Hollywood, and Hollywood. A surface streetcar utilizing Santa Monica Blvd (SMB) and more, might be genus, http://ridethepinkline.blogspot.com

I could not expand the image size, but the stops appear to be:

Of course the Devil is in the Details, but this route could be relatively inexpensive to complete with one modification. If it stays surface by avoiding Hollywood & Highland, to instead go up Sunset to the big redevelopment at Sunset/Vine, then east to the Red Line station at Sunset/Vermont, then its a short scoot to Silver Lake, Echo Park and Downtown.

Coupled with the North-South line, the Sunset-Santa Monica line sounds sounds like a winner with lots of patronage generators in between. From a West Hollywood coverage perspective, the only station missing from the 2 rail lines would be Beverly Center. But given 4 total stops in a small, but geographically strategic city, that would be unmatched transit coverage compared to any other city in LA. The Sunset-Santa Monica streetcar line could also connect to the Expo Line at Westwood/Expo for good measure. I would support it.