What I Learned at the Sepulveda Transit Corridor Project Community Meeting

Transit advocates have been dreaming of a public transit rail line through the Sepulveda Pass connecting the San Fernando Valley to the Westside for a long time now, from as far north as Sylmar to as far south as LAX.  The Transit Coalition has supported this concept as its proposed "JEM Line" for years.

Metro has been moving forward on its version of this ideas as the Sepulveda Transit Corridor Project, and has been having community meetings to brief stakeholders and obtain feedback on where it is in the development process.  Please view the presentation we saw at the community meeting by clicking here.

Here is where we are at in the current round of the process.  It is best to think of this project in two basic segments -- (1) between the Valley and Westwood and (2) between Westwood and LAX.

The first thing you should know is that there is already an East San Fernando Valley Transit Corridor Light Rail Project that has been approved by Metro.  Therefore, whichever Valley to/from Westwood alignment Metro chooses will need to take this other rail project into account. 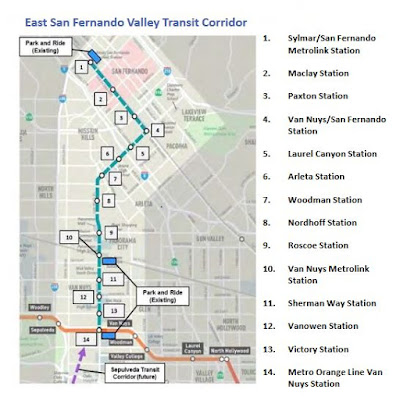 Here are the four proposals still in the running for the Valley to/from Westwood segment: 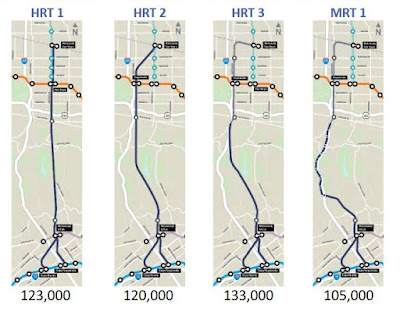 MRT means Monorail.  Many people who've been to Disneyland or Disneyworld ask, "why can't we just do a Monorail?".  As you can see it would be one of the lower ridership options.  Also, as a new type of vehicle for rail transit for Metro, monorail would require a new type of maintenance yard, and also a new classification of labor trained to maintain and operate it.  Therefore, I don't expect it to go much farther in the analysis process.

This leaves HRT1, HRT2 or HRT3.   While HRT3 is predicted to have the most ridership upon completion, the direction of travel pretty much ends this route eventually being extended up to Sylmar in the future.  Why do that when Metro is already building an East San Fernando Valley Light Rail?  As Metro Staff explained, the light rail project is meant to be a local service, while this Sepulveda Transit Corridor project is meant to a regional rail project, where stations will be farther apart.

Basic details about all these alignments may be found on the presentation delivered at the community meeting which you can find by clicking here.

Here are a couple of things I learned from at the community meeting.
Westwood to/from LAX
What you need to know about this segment is that Metro is looking at an alignment near Sepulveda & the 405 Freeway or one closer to Centinela.

Here is the Sepulveda / 405 alignment. 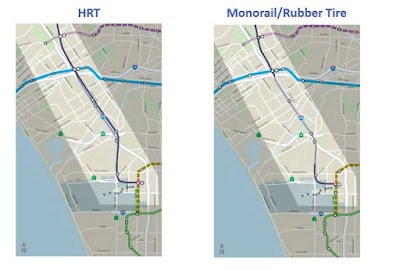 For reasons I explained earlier, I don't expect Monorail to make the final round, so I'd pay attention to the one of the left.  Now here is the Centinela alignment: 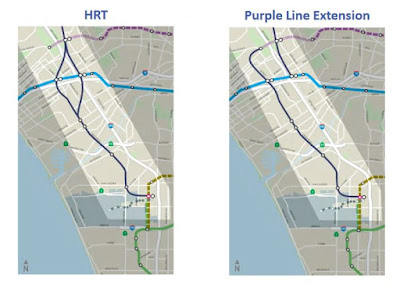 The most interesting to notice here is that Metro is studying a Purple Line extension going SOUTH to LAX.  I have my doubts as it would reduce the available capacity to transport passengers from the Valley, but Metro is obliged to study everything.

When completed and online, this rail line will be a VERY busy, and one of the major arteries of our transit system.  Metro believes it can promise a 15 minutes time of travel between the Valley and the Westside that will be faster than most auto trips on the 405 Freeway.

There will be one more meeting on this round on February 5th at 6:00 PM, at the Proud Bird Restaurant, near LAX.  Further refinements will take place and there will be a new round of meetings as Metro moves toward its "Locally Preferred Alternative".

You can find more information about this project and share your feedback with Metro at metro.net/sepulvedacorridor and you can see the full presentation from the community meeting here.

What do you think?