Homelessness and Public Transit in Southern California -- What is the answer?

Homelessness is not only a housing issue, but a public transportation issue too. Here is shiny new bus stop seating right across the street from West Hollywood City Hall that no paying or prospective transit passenger on their morning commute can use because it has been taken over by a sleeping homeless person. 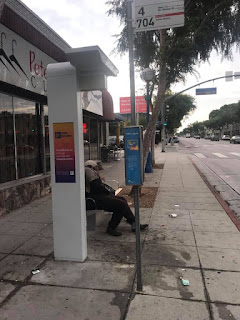 Other scenarios people who use transit are all too familiar with:
- A homeless person takes up multiple seats with their belongings forcing other people to stand.
- A homeless person either under the influence of alcohol/drugs and/or is mentally ill is disruptive and threatening to other passengers.
- A homeless person who hasn't bathed in several days makes for an unpleasant ride for everyone else around him on the bus.

This post is not meant to be a general complaint about "the homeless".  I have tremendous compassion for homeless people.  We are speaking of  flesh and blood human beings here who deserve our consideration and respect and help.

However, allowing homeless people to take over public transit infrastructure hardly seems fair to the paying transit passengers who deserve safe, clean, comfortable rides.  (If you are someone who drives a single-occupancy automobile thinking, "Well, what's the problem?  I'd stand for a homeless person,"  I'd ask you in return, "how often do you have to?"  It's easy to invoke someone else's inconvenience in the name of one's own compassion.)

When increased homelessness spills onto the transit system and its infrastructure, it suppresses transit ridership because it makes the journey less comfortable and for some people less safe.  So then some people who can afford to opt out of the system, do.  I don't have any raw numbers, but I certainly have an endless supply of anecdotal evidence from people who tell me this is one of the reasons they personally avoid using transit or have stopped using transit.

There are two basic visions of public transit I come across:

(A)  "Public transit is method of moving masses of people of all classes and demographics conveniently from place to place, increasing mobility, cultural opportunity, and economic prosperity, while helping the environment and quality of life for all by providing an reliable alternative for people who would otherwise exacerbate traffic problems by driving more cars on our already clogged roads."

(B)  "Public transit is a form of "transportation welfare" meant to provide a subsistence level of mobility to poor people who would, of course, get their own automobile as soon as they have the means and opportunity."

Too many people think of transit in Southern California solely as (B) and therefore don't see the problem here.  Having lived in New York, and other cities, I envision transit as (A), and that is why I seek to improve it for everyone in the Southern California region, because I see everyone as a potential user.

However, it is increasingly clear to me that unless we do a better job of addressing the issue of homelessness in Southern California, our best efforts to improve transit here are going to be inhibited.  In essence, those of us who are transit advocates need to become homelessness advocates out of necessity.

What is the scale of the homelessness problem in Los Angeles?  The Los Angeles Homeless Services Authority (LAHSA) estimated 59,000 people on the streets of Los Angeles County.  That is truly a heartbreaking number.

So how can we solve this?  The City of West Hollywood addresses homelessness with a multi-disciplinary, multi-agency, collaborative response.   The City also has a five year plan to address homelessness.

However, no one city or one community can solve the issue of homelessness for the whole region.  All of us in Southern California need to do our part, and every community in Los Angeles County needs to do its part too.

What do you think?   Constructive and compassionate solutions welcome.

Metro Los Angeles has a homeless task force.  An article about how Metro is expanding its homeless services appeared in the Santa Monica Daily Press on June 1, 2019.  Please click here to read it.

Great article, and a compassionate way to view our homeless brothers and sisters.